A graduate of UCLA (B.S. in electrical engineering) and NYU Law School (Juris Doctor), Judge Raymond Chen (1986) has pursued a career in law. In 1994 he joined the intellectual property law firm of Knobbe, Martens, Olson & Bear in Irvine, Ca. He then served as a technical assistant at the U.S. Court of Appeals for the Federal Circuit. Next, he served as an Associate Solicitor and eventually Solicitor for the U.S. Patent and Trademark Office. In February of 2013 President Barack Obama nominated Ray to serve as a U.S. Circuit Judge of the U.S. Court of Appeals for the Federal Circuit. He was confirmed by the U.S. Senate on Aug. 1, 2013 by a 97-0 vote. 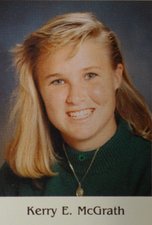 Kerry “Mac” Crooks (1989), better known as Coach Mac by her players and friends, is a graduate of UCI where she competed on the Women’s Soccer team, was a four-year starter, team captain and scholar athlete. In 1992, she was named Anteater of the Year and chosen Most Inspirational Athlete. She has a B.A. from UCI and a Masters in Educational Psychology from Pepperdine. In 1991 she was appointed Varsity Girls Soccer Head Coach where her teams have won nine Sunset League Titles and have made the CIF playoffs 26 of her 27 seasons. She led the Chargers to a CIF title in 2002 and was in the 2014 CIF finals. She was CIF Coach of the year in 1993 & 2003.

After graduating from USC with a BA in History, Randy Hetrick (1983) spent the next 14 years leading Navy commandos around the globe. His operational career culminated as a Squadron Commander of the SEAL’s elite special mission’s unit. While a SEAL he developed what would become the TRX Suspension Trainer. After leaving the service, Randy attended Stanford’s Graduate School of Business to earn an MBA. He is the creator and founder of TRX one of the fastest growing companies in sports and fitness. TRX produces some of the most innovative training products and exercise programs and has redefined the application of bodyweight training.

Thomas Proulx (1979) is a pioneer in the consumer software industry as co-founder of software giant Intuit and author of the company’s flagship personal finance product, Quicken. He started the company from his Stanford dorm room, and today Intuit is one of the leading software companies in the world, with annual revenues of $5.8 billion and a market capitalization of over $50 billion. Tom was a recipient of the Inc. Magazine Entrepreneur of the Year Award and the University of Southern California’s Entrepreneur of the Year Award. He was also awarded Silicon Valley Forum’s Software Visionary Award. After Intuit, Tom co-founded and served as chairman of the board of Netpulse, Inc., a venture-backed fitness-tech company recently acquired by European fit-tech giant, eGym GmbH, and Tom now serves on the eGym board of directors. He has advised and served on the boards of numerous angel- and venture-backed technology startup companies, including iControl, Plumchoice, and Dropwater.Tom earned his degree in Electrical Engineering from Stanford University, where he was a Hughes Fellow. He has been a passionate adventure racer for two decades with his team “And Loving It!”

A Cum Laude graduate from UCI, Susan Jennings King (1977) entered the graduate program from MIT where she received her PhD. in Organic Chemistry. While at MIT, she was able to invent new techniques for use in organic synthesis. These are useful to those doing drug discovery research. In 1995 Susan returned to UCI to teach Organic Chemistry to the schools undergraduate Chemistry majors. Susan was selected Outstanding Professor in the School of Physical Sciences in 2002 and 2004. She was named Professor of the Month by students in 2003 and in 2014 received the Excellence in Teaching Award from the National Society of Leadership and Success.

Paula Spence(1987), began her career as an artist the week after graduating from Edison High School in 1987. She worked as an illustrator and graphic designer while attending Orange Coast College and received her Bachelor of Fine Arts degree in Illustration from CSULB. After several years as an artisan and conceptual designer at Disneyland, she began her 20-year animation career as a background designer on SpongeBob SquarePants, moving on later to Invader Zim, Chalk Zone, Duck Dodgers and Camp Lazlo. Her skills and knowledge of the animation process led her to Art Direction, and since 2006 she has led creative teams to produce the artwork for numerous TV animation shows such as The Marvelous Misadventures of Flapjack, Regular Show, Rocko’s Modern Life: Static Cling and PowerPuff Girls at Cartoon Network and Nickelodeon. Paula is currently Supervising Art Director for Close Enough on TBS and is providing visual development for the new SpongeBob feature film at Paramount Studios. Her interests in science, education and volunteering brings her into frequent collaboration with The Brights and the National Center for Science Education, who gave her their Friend of Darwin Award in 2016.